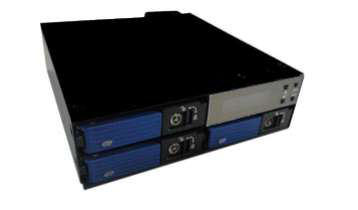 ACT-ARS6013ASB is an internal platform , that is specifically for personal video/audio, editing storage and DVR Raid storage applications.

The RAID subsystem controller is designed to use three 2.5 inch SATAII disk drives to fit in a one 5.25” half-high drive bay for easy built-in the pc server, It allows easy scalability from JBOD to RAID, it can be configured to RAID levels 0, 1, Large(big), Scheduled Backup and Manual Backup.

The RAID function allows one HDD failure without impact on the existing data and failed drive Data can be reconstructed from the remaining data and parity drives. RAID configuration and monitoring can be done through the LCM front control panel or RAID manager utility.

In the ACT-ARS6013ASB, We Adds two useful data backup functions, one is Scheduled Backup the other is manual backup. thesetwo functions to support the user to do an automatic or manual backup when he needs.

At the same time, Users can keep a HDD with the latest data during the data backup process, this purpose of this design is to prevent the two hard disk drives damage at the same time in RAID 1 mode. That is specifically for vibration environment.

SATA port of host in the design of ARS6013ASB.

For ACT-ARS6013ASB RAID subsystem, that is also a standard part of all major operating systems such as XP/2000/2003 server, Mac, Linux, ETC, the host system does not require additional or proprietary software to work with the controller.

Driverless: need no driver on host side